Many of you have asked where I've been for the last while as I've been absent from this blog and my life at Reggio Kids. I've taken a short break from my career. 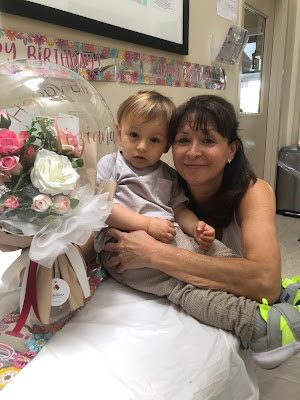 For the past 5 months, I’ve been on a leave of absence from my adult life spending the better part of my days with my toddler grandson. There’s a lot to be said about giving yourself over to the life of a child. Without the distraction of phone calls, social media, a hectic work schedule or television, I’ve delved into the world of this extraordinary toddler with his exuberance and unrivaled joy for meeting each day and the wonders it offers.

Every morning I find him waiting for me in his crib with his ever present infectious smile. We are in no particular hurry to go anywhere, so I allow him the time to get ready for his day on his terms. He may choose to bounce around in the crib, or have a bottle of milk as he surrounds himself with his binkies and pillows. He likes to have many of his favorite snuggle toys. Many being the word he uses for more than one.

When he’s ready he asks to come up and then he romps around his room or we play timber which entails falling to the ground and rolling around with our legs in the air. He learned that word when he fell off his riding toy and I said, “timber.” Now anytime he topples, its timber!

In lieu of a few rounds of timber, he may decide to hide in his closet or in a pile of pillows and blankets.

Eventually he allows me change his diaper and dress him and we make our way to the kitchen for breakfast. At times we pack it up and eat it on route to the park or in the backyard or porch where we begin our day of adventure. He has little patience to sit in his high chair for 15 minutes to consume his feast.

Where we spend our day depends on the weather, too hot means under the deck with water play, sand, collecting rocks from the yard or riding toys down the hill of grass. Mild means the park where we chase the geese, play on the equipment, dig in the dirt, or run up and down the hills. We make time every day to go down to his fully equipped play room.

I’ve watched him kiss trees, follow tiny ants, run across a field, attempt to play basketball with the big, big net, kick soccer balls, chase the geese while screaming, "ducky, ducky, ducky", gaze into the pond as the geese swim or fly in, all in the span of a few hours or less. Not to mention swing, slide and dig in the dirt. 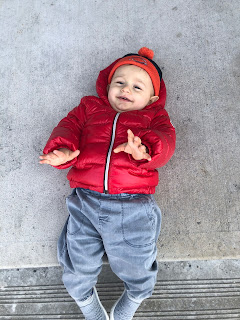 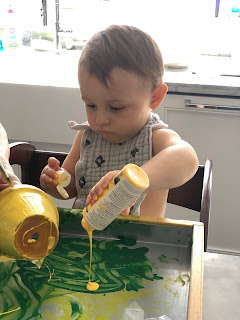 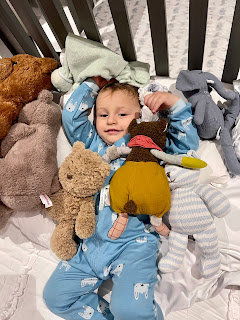 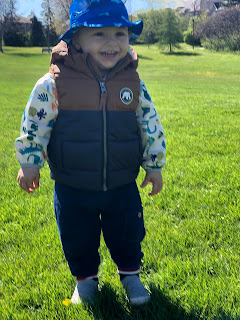 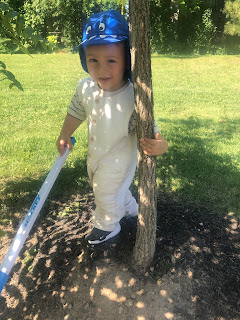 He likes to go high, high on the swing. When he gains height or its windy, I ask him to catch the wind. He stretches his arms out and throws his head back, “windy” he says. When the sun hits his eyes, he says, “too sunny”.

I’ve forgotten what it means to be an adult as I spend the day through his eyes, stomping, going down the slide, sitting on riding toys as we race across the room, running, chasing and laughing abundantly.

Every new discovery is a wonder.

He has no fear, no inhibitions, and no expectations. He simply lives to unravel the mysteries of the day.

I have no agenda and he knows I am present in his world, every ready to tackle whatever the day brings. The concept of tired does not exist as I devote myself to being his partner in crime.

Five months is a lifetime in terms of change on all levels.

His language has increased exponentially. Words come at a rapid pace.

He is stable on his feet and can ride his bikey or vespa like a pro. I run alongside him as he scoots along. I watch him for behind as his body rocks the vespa, his little behind swaying back and forth. The movement of the wind through his hair is a clear indication of his speed. The bumpier the path, the happier he is. “Big bumps,” he says as he pushes his vespa onto grassy mounds. When he catches an incline he raises his leg so he can coast along. He’s come to understand that he has to wait at the end of his driveway so I can check for oncoming cars before he can cross. When I say, “okay,” he repeats the word and off we go.

He waves hello and goodbye to people while saying the words and occasionally adds a, “see you.”

He discovered a wind mill on a neighbor’s property in early spring and he loves to watch it spin. Now as he scoots along, he always remembers to make a pit stop to see the windmill, a word he says quite clearly. He has a clear view of it from his change table his bedroom.

In early May, his parents had some work done on the outside of the house. I stood him on the window ledge as a small bulldozer dug up dirt. I called it a dig dig. A term that stuck with him which he now associates with all large construction vehicles. Whenever we go out, he looks for dig digs.

The sound of his little voice as he calls out to me to join in his antic, “Nonna!”, meaning nonna do it, nonna go faster, nonna get moving, always makes me laugh.

He has an amazing sense of humour, often teasing me with a possible bite of something he’s eating or a suggestion to hop onto one of his ride along toys, only to quickly consume the food himself or hop onto the toy before I get there. I sing the eetsy bitsy spider with a big voice or a teeny tiny voice and he makes me change voices many times in the same breath. He changes his voice big or tiny to indicate which one I should use.

He is forever hiding around corners, under blankets, in his tent. Finding him brings huge peals of laughter.

He loves ice cream and choco. Treats which I give him sparingly and he’d love as his main meals. He says, “choco” and I say, “broccoli” and so the game begins of yelling, “choco” as I say, “pasta” and on and on we go with peals of laughter in between.

These are a few of our favorite things!

We’ve now come to a new path in our relationship as he integrates into life at daycare. The foot prints of the memories we created over the last five months will remain with me forever. Mateo will have no memory of them but I can only hope, that the love and devotion will last a lifetime.

Tomorrow is a new day for Mateo and Nonna!