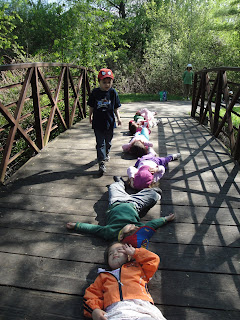 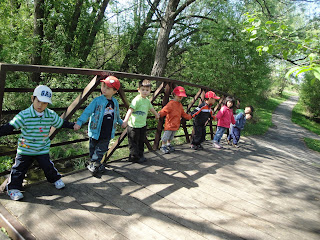 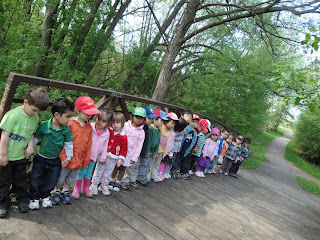 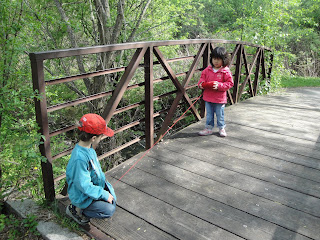 How long is our bridge?
The children made some interesting suggestions to determine the length of their bridge;
they used a string, and their own bodies as tools for measurement. Using non standard forms of measurement is a precursor to formal skills in this area introduced later in the curriculum. 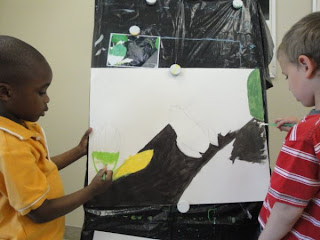 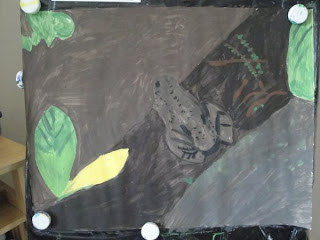 These boys discovered a toad resting by the creek during their morning nature walk. They were amazed that the toad blended with the surrounding foliage making him almost invisible. This painting is a representation of their discovery, a discovery which led the children to a project on camouflage.
Posted by Tiziana Ciccone at 3:05 PM No comments:

Lorena has a Sticky Problem 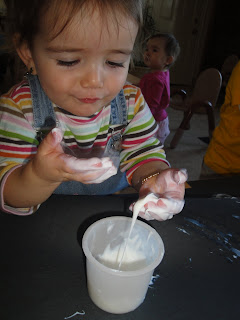 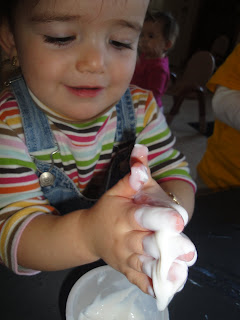 Lorena dips her hands into the paint pot, expecting the typical finger paint. Much to her surprise she pulls out her hands only to find them filled with glue.

Most often such an activity is called "sensorial play" and justified with phrases such as "they are exploring their sense of touch." Such phrases, perhaps derived from Montessori's phrase of "educating the senses," imply that the children are learning what objects are smooth, what objects are rough, what objects are sticky, what objects are not. The emphasis is placed on a refinement of the sense, in this case touch, so that with experience, like a sculptor choosing the right wood, the child can determine the texture, the temperature, the grain, or the adhesiveness of objects. The literature on sensorial play seldom reveals the strategies the children use to make these distinctions and seldom reveals the extensions the child makes once an attribute, such as adhesiveness, is discovered. What does it yield for something to be sticky? What can I do with sticky? How can I have fun with sticky? These extensions are not classically "sensorial." These extensions go beyond "Is this sticky?" or "To what degree is this sticky?" These extensions enter the world of invention, reasoning, inferring, figuring things out, and "what if "games. 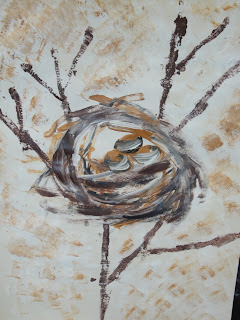 Early Childhood Educators are taught to believe that children should explore art materials freely; leaving them to discover the how to on thier own. At Reggio Kids experience has shown us a new way to work with artist forms and children.
As with all crafts, lessons in basics must be learned in order to achieve desired result; the size of the paint brush, the type of stroke, the properties of the paint, techniques for achieving texture. These are but a few of the areas that children explore with their teachers.

In this attached painting, Robert a three and a half year old, painted a representation of a bird's nest that sits in his classroom; a treasure discovered by the children on a morning walk.
Paintings of this calibre continue to fill our schools as the children hone their skills.
Posted by Tiziana Ciccone at 4:33 AM 1 comment:

Marco and the Rocks 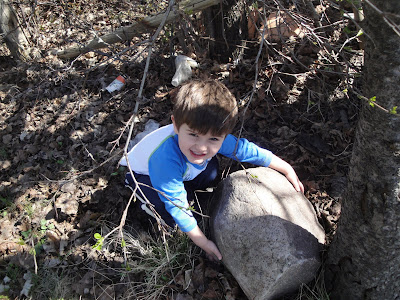 The natural world provides children with many serendipitous opportunities for learning. In this experience Marco was able to explore the terms heavy, light, big and small.

During our afternoon walk, Marco noticed a large rock on the ground.

Marco- I want to pick it up.

Marco walked over to the rock bent down and tried to pick it up.

Marco- I can’t pick it up it’s too heavy, but I want the rock.

Rosa- So what do you want to do?

Marco- I want to try again.

Marco bent down to try again.

Marco- I can’t Mrs. Rosa it’s too heavy. (They negotiated ways to transport the rock back to school. Given that they did not have a wagon with them, they decided to leave the rock where it was)

On the way back to school he noticed a smaller rock so he bent down to pick it up.

Marco- I have a small rock, this one is easy to pick up.

Rosa- Why is it easy?

Marco- Because this one is a tiny rock. 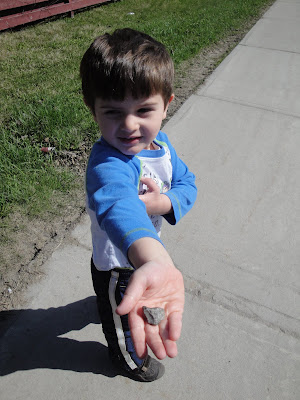 Rosa- You can try Marco.

Marco bent down to pick up the rock but complained that it was too heavy as well. 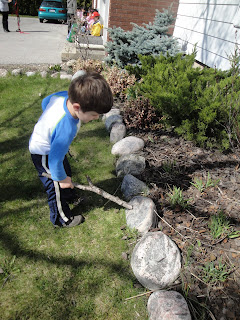 Rosa- So how can you pick up the rock?

Marco- (Picked up a stick sitting in the soil) I want to push the rock. (He propped the stick against the rock and tried to push it) Marco demonstrated good problem solving skills; perhaps he witnessed an adult using this type of leverage to move a heavy object.

Rosa- Can you push it?

Marco- The rock is too big, the stick will break

.Rosa- So how can you pick up the rock?

Marco- My daddy can pick it up he’s strong

This bridge is located in a park near our schools. Beneath it a river flows filled with tiny fish and frogs.
On this particular day the children were asked to consider what the purpose of a bridge might be.
They did not consider that bridges enable people to cross over spaces that would otherwise not be accessible by foot, car or train. Bridges take us over rivers, lakes, streams and brooks, across fields, forests and mountain ridges keeping us connected to people and places.
For the children it was a place of action.
A place to run, crawl, roll, skip, race and hop! 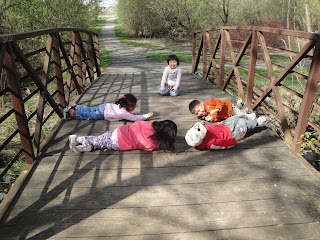 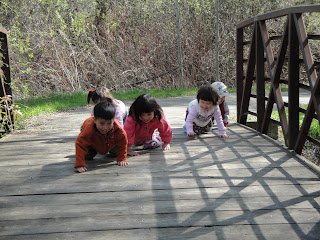 A Ray of Light 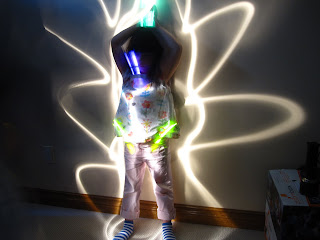 This exceptional moment happened when the children began to experiment in the dark room.
The teacher provided them with flashlights and she instructed them to move them around. Their motions were captured with a digtal camera and printed.
Posted by Tiziana Ciccone at 10:06 AM 1 comment: