The Story of a Pig and His Friend Charlotte 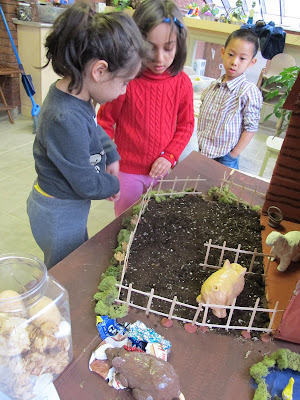 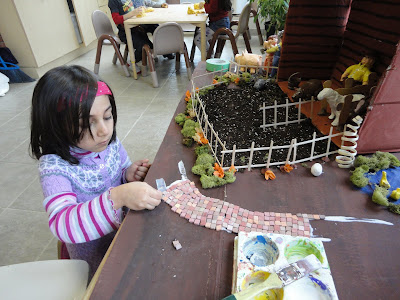 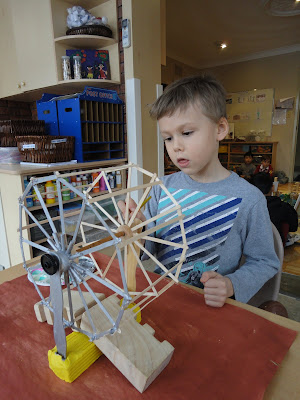 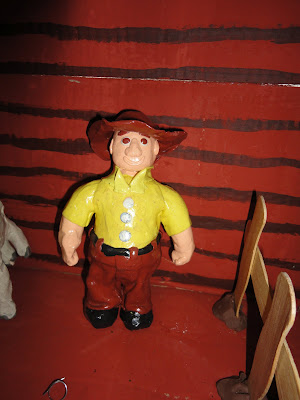 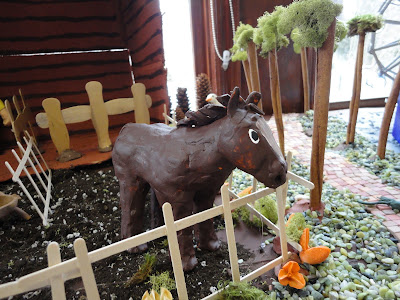 Charlotte's web is a story of friendship and courage. By its very nature this tale offers many learning opportunities as teachers reflect on the importance of accepting differences (Should Wilbur die because he is the rut of the litter?  Should people be excluded because they are not the same?) When Charlotte dies the children learn about the cycle of life (sadly to everything there is a season). Characters,setting and plot are studied. New words are discovered and reading becomes joyful.
Posted by Tiziana Ciccone at 2:49 PM 4 comments:

The Power of Documentation Lies In The Picture

A good picture lends power to documentation. Even before I look at the document that accompanies an experience, I turn to the picture to tell me the story, to identify the learning, to make the connection, to show the child's emotions, interests and expressed theories. 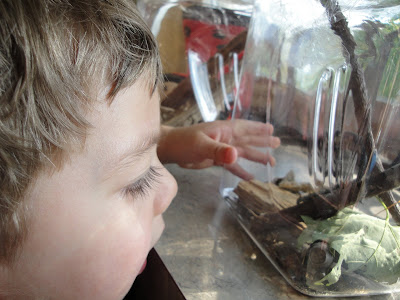 Capturing those perfect moments and the complexity of learning, requires an attentive teacher. One who is actively engaged in the process of constructing knowledge. 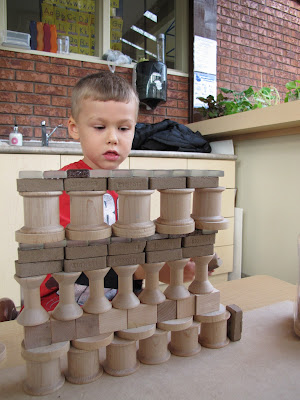 While documenting bear in mind that the pictures are just as important as the accompanying discourse and comments. For the parents of the children, the pictures may be more meaningful because most often they observe the pictures rather than read lengthy explanations. Thus, good pictures are crucial to effective documentation. 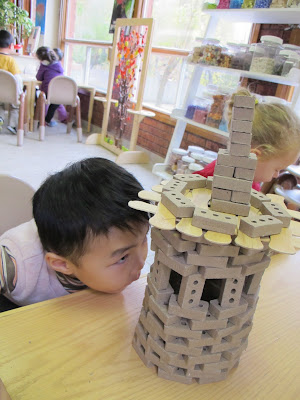 It is the thinking that you are seeking, that powerful moment when the child makes a connection. Effective pictures tell what the child is learning, thinking or intending to do not just only what he/she is actually doing. Especially with younger children, when language is limited, your pictures are the most powerful documentation tool. Ensure good visibility to the child’s face.Facial expressions will tell their story.

Digital cameras allow you to take many photos so snap away. When you have a quiet moment you can select the ones that demonstrate the process best. 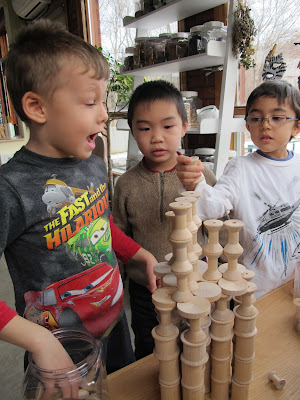 Group pictures are equally as important in the constructing and deconstructing of theories. This is especially true with older children where much happens in group discourse and work.
Posted by Tiziana Ciccone at 3:43 AM 10 comments:

Embedded in the Wings of A Butterfly What did We See?

A chance encounter with a monarch butterfly led to the making of this exceptional mosaic.
As the children looked at the wing span of the butterfly they thought they saw a human face. Was that the case? At the same time new loose materials arrived at the school and the teachers asked the children if they would like to design their own "human face" butterfly using some of the intriguing materials.  How would they design it? Suggestions were made to use google image to find the ideal model. Although the first recommendation from the teacher was for the children  to make their own drawings they were far too excited when they discovered this exceptional image. 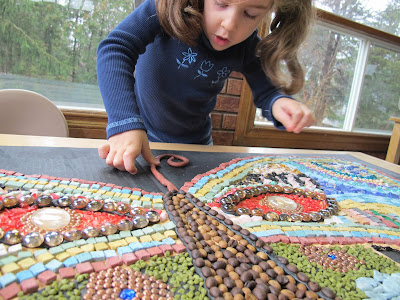 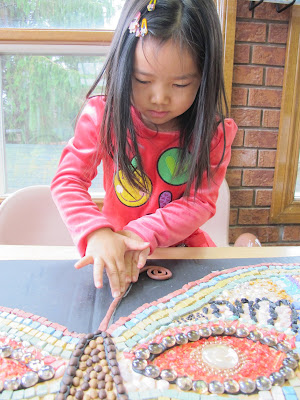 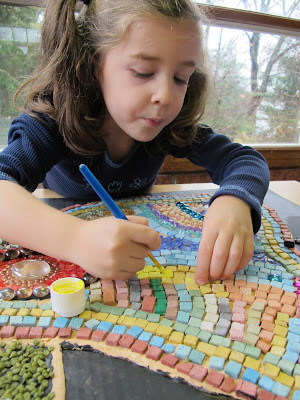 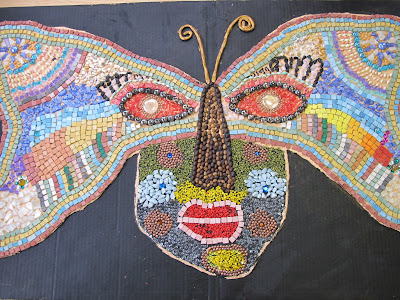 Have a look at the city in motion project and take a stroll in the country!

Click the link on the right of the page-enjoy! 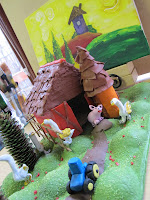 Posted by Tiziana Ciccone at 7:24 AM 4 comments:

The Nutcracker- A SK Holiday Favorite!

It’s a cozy Christmas Eve at the Stahlbaum’s house. Their house is decorated with Christmas ornaments, wreaths, stockings, mistletoe and in the center of it all, a majestic Christmas tree. As the Stahlbaum’s prepare for their annual Christmas party, their children, Fritz and Clara, wait anxiously for their family and friends to arrive. When the guests finally appear, the party picks up with dancing and celebration. A mysterious guest arrives dressed in dark clothing, nearly frightening Fritz, but not Clara. Clara knows he is Godfather Drosselmeyer, the toymaker. His surprise arrival is warmly accepted and all the children dance and carry on with laughter. The celebration is interrupted again when Drosselmeyer reveals to the children that he has brought them gifts. The girls receive beautiful china dolls and the boys receive bugles. Fritz is given a beautiful drum, but Clara is given the best gift of all, the Nutcracker. Fritz grows jealous, snatches the Nutcracker from Clara and plays a game of toss with the other boys. It isn't long until the Nutcracker breaks. Clara is upset, but Drosselmeyer fixes it with a handkerchief. Drosselmeyer’s nephew offers Clara a small make-shift bed under the Christmas tree for her injured Nutcracker.
The party grows late and the children become sleepy. Everyone generously thanks the Stahlbaum’s before they leave. As Clara’s family retires to bed, she checks on her Nutcracker one last time and ends up falling asleep under the Christmas tree with the Nutcracker in her arms. At the stroke of midnight Clara wakes up to a frightening scene. The house, the tree and the toys seem to be getting larger. Is she shrinking? Out of nowhere large mice dressed in army uniforms, lead by the Mouse King, begin to circle the room while the toys and Christmas tree come to life. Clara’s Nutcracker groups the soldier toys into battle formation and fights the mouse army. The Mouse King traps the Nutcracker in the corner, but the Nutcracker can’t overcome the Mouse King’s strength. Clara makes a desperate move to save her Nutcracker from defeat and throws her slipper at the Mouse King. She hits him directly in the head! The Nutcracker is able to overcome the stunned Mouse King and claims victory. The mice army quickly carries away their King.
Clara falls onto the Nutcracker’s bed, over-whelmed by the moment. As angels and delightful music hover over their heads, the bed turns into a magical sleigh, floating higher and higher. The Nutcracker is transformed into a human prince (who looks strikingly similar to Drosselmeyer’s nephew). He gets on Clara’s sleigh and drives through a snowy forest where the snowflakes turn into dancing maidens.
After their magical journey through the snow forest, they come to their destination in the Land of Sweets. Clara can’t believe her eyes; ladyfinger mountains topped with whipped cream whiter than snow, sweetly glazed flowers and butter-cream frosting everywhere she looks. Upon their arrival, they are greeted by the Sugar Plum Fairy. As they reenact the night’s events, the Sugar Plum Fairy becomes impressed with Clara’s bravery and the Nutcracker’s heroism. In their honor, the Sugar Plum Fairy takes them inside the Candy Castle and throws a lavish festival. They are treated like royalty and presented with every imaginable sweet. Shortly thereafter, the dancing begins.
Hot coco dances to the lively music of trumpets and castanets of the Spanish fandango. The women of coffee dance in veils and move their bodies like rising steam to an Arabian song, while Mandarin tea dances to an exotic Asian flute chorus. Matroishkas (Russian dolls) follow the Mandarin tea leaping and dancing to an invigorating Russian Trepak.
To Clara’s enjoyment there is still more to be seen. A giant gingerbread house, known as Mother Ginger, dances onto the Sugar Plum Fairy’s court. She opens her skirt and eight little gingerbread children come dancing out circling around her. After the Mirliton dance is over, the children quickly file back into the large gingerbread house and Mother Ginger leaves the room. Soon after Mother Ginger exits, the dancing flowers enter to the tune of the harp. Perhaps the most beautiful waltz she has ever heard, Clara and the Nutcracker Prince watch with amazement. The flowers dance in beautiful mesmerizing patterns as a single Dewdrop floats above them.
Silence quickly follows the end of their dance. Clara doesn’t know what to expect next. A handsome Cavalier enters the scene and escorts the Sugar Plum Fairy to the center of the room. They dance to the most recognizable song in the entire work. The captivating pair dance lighter than air. This beautiful dance completes Clara’s most perfect evening. The festival concludes when everyone comes together on the court and bids Clara and the Nutcracker Prince farewell. She tells the Nutcracker she wishes the adventure would never end and he tells her it won’t for those who have an eye to see it.
Clara wakes up the next morning under the Christmas tree with her Nutcracker still in her arms. http://classicalmusic.about.com/od/balletsynopses/a/thenutcracker_2.htm 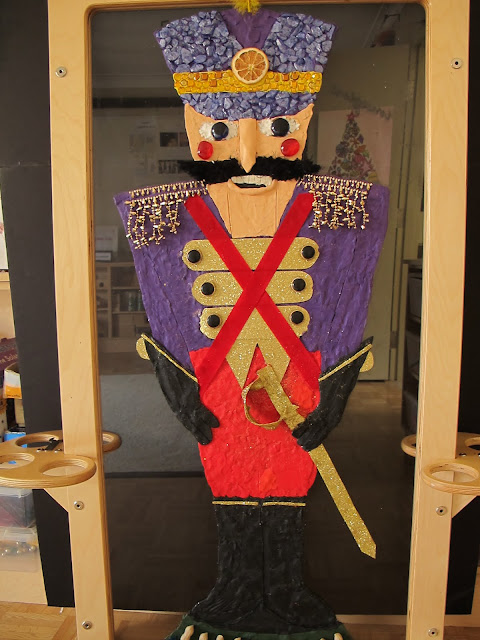 Posted by Tiziana Ciccone at 2:13 PM No comments: 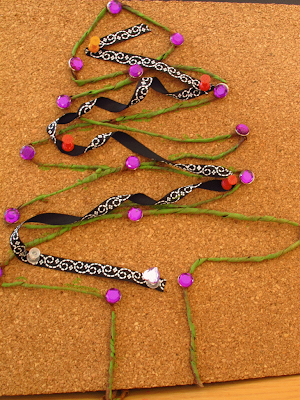 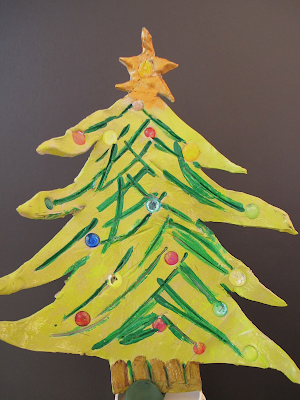 The use of evergreens to decorate homes during the Christmas season dates back to the beginning of the 19th century.  But these hardy trees were used much earlier by pagan cultures who believed that they represented life and hope; two much needed elements to sustain people through long frigid winter months. Candles were used to light the ends of the tree branches to ward off evil spirits that were at their worst during the coldest days.