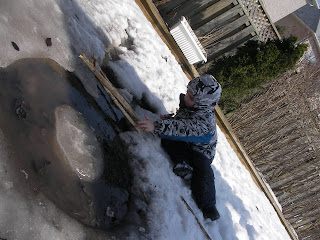 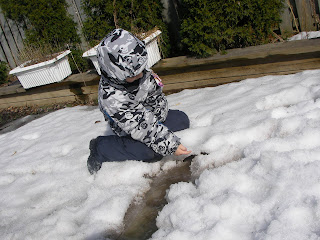 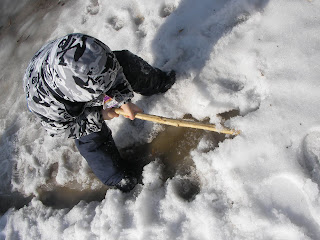 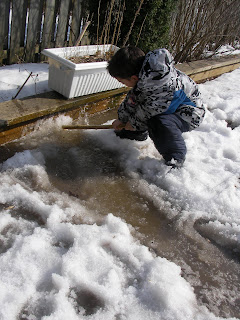 The melting snow from the winter season left behind a slushy mess but not to worry it was a perfect opportunity for Nicholas to work on his engineering skills.
Nicholas discovered a “lake” in the middle of the playground. It’s very design fascinated him because it had a small “island” in the middle. Two small streams branched out at the edge of the “lake.” “We need a bridge here,” said Nicholas.
“What will the bridge be for?” asked the teacher.
“So I can get to the other side,” he replied.
Nicholas found two branches and bridged them across the opening of the two streams. He walked across.
“My bridge is sturdy!” he declared triumphantly.
He then walked along the length of one of the streams. Looking at the water he said, “I want to stop the water.”
“What will you use?” asked the teacher.
He found a few leaves. “These,” he answered.
Nicholas placed them into the water but the depth proved to be too much for the small leaves as they swirled about and sunk to the bottom. He reconsidered his intent and pulled them out of the water taking them to where the stream hit the snow bank.
“Nothing is happening,” he said as he watched the water push against the snow.
It was time for a new plan. He returned to his bridge and removed the larger stick. “I’m going to make the stream longer!” he declared.
Chipping away at the snow he elongated the path for the water until it hit the edge of the garden bed. “Look,” he cried, “the water is following me.”
Posted by Tiziana Ciccone at 9:20 AM 3 comments: 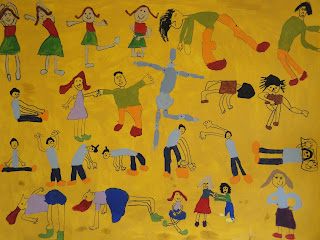 Can the movements of children's bodies be captured on canvas?
This question posed a definite challenge for the children.
How does it all work? Even at rest our bodies are in constant motion; a slight twitch, the jerk of a knee and even a simple smile require the use of a complex set of muscle movements.

We are Children of the World 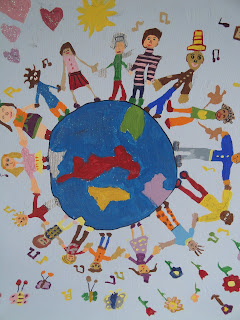 We all Sing in One Voice

When do young children become aware of others?
Do they understand that the world is vast and there are children everywhere? Do those children laugh and play? Do they have toys, go to school, eat drink and sleep?

At the age of four children do begin to understand "otherness" as they move out of their egocentric worlds and begin to build relationships, form community bonds and sing in one strong voice!
A community project led to the design of this beautiful painting.
What is Community?

Coming from the Latin term meaning “with gifts”, the term suggests a general sense of humanity,
reciprocity and a shared practice of doing good for other that comes from working together for a joint purpose.
“Communities help generate a shared language,
rituals and customs, and a collective memory of those that join the group.”
www.learnactivity.com/community.htlm

If we give credence to the old African proverb that “it takes a village to raise a child” then we can understand the impact that community has in
helping us raise our children.
Children need more that just supportive parents. As they branch outside the home they require a larger network to grow into healthy citizens.
It is a child’s right to expect the community to provide them with safe neighbourhoods, adults who are good role models and dedicated teachers and politicians who keep children's rights at the forefront.
When children feel a connectivity to their
community they are more apt to develop a sense of civic and social responsibility. They build trust, learn to resolve conflicts peacefully and have a genuine sense of caring for others.
As a community of schools within the larger
community of Richmond Hill, we work together to
create a rich context of experiences that define us and support our children to grow into responsible citizens.

The Mural (As dictated by the children)

The musical symbols are children singing all over the world;singing in different languages but with one voice.

The butterflies are beautiful creatures that make children happy no matter where they live they can find butterflies.

The flowers smell nice and children around the world want to smell nice flowers and feel happy. Flowers are also beautiful gifts for others.

The blue ocean is the color of water. water is the gift of life and a source of energy.

The light blue background helps all children to see clearly so they can find their way home.

The children are holding hands around the earth to protect it from bad things. The are joined in friendship and happiness.
Posted by Tiziana Ciccone at 1:57 PM 2 comments: 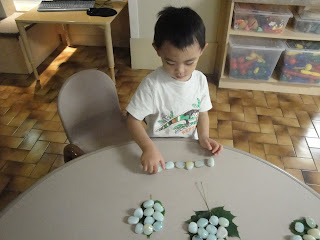 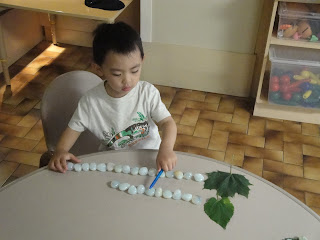 We observed Joshua at work at what first appeared to be the simple task of filling the leaves with stones. However, Joshua showed us that his experience was packed with learning.

Joshua covered different size leaves with natural stones.
He tried to count the stones on his two leaves to find out which one had the most, but he could not get a correct number because” the stones were everywhere on the leaf”, so he then decided that if he lined them up, it would be easier to count them.

After placing the stones in two lines and counting 16 for the first leaf and 13 for the second leaf, he commented, “This is bigger!” pointing to the leaf that had the most stones.
Joshua surmised that the larger leaf was able to hold the greater number of stones therefore it was definitely the biggest leaf.
Posted by Tiziana Ciccone at 8:35 AM 1 comment: